Snuza baby movement monitors are very popular but you might find it increasingly hard to find the correct type of replacement battery to fit your Snuza monitor. Snuza themselves have stopped supplying spare batteries and there have recently been some design changes to the Snuza baby breathing monitors, adding to the confusion. There are now two different types of battery to choose from, both of similar size but incompatible with each other. We have outlined below how to tell what Snuza model you have and how to choose the correct replacement battery.

The original models of baby movement monitor from Snuza include the Snuza Go, the Snuza Halo and the Snuza Hero, plus the rebranded versions sold as the Levana Oma and Oma+. The easiest way to identify these original models is the absence of the letters “SE” or “MD” on the front label. Click to enlarge the photo: 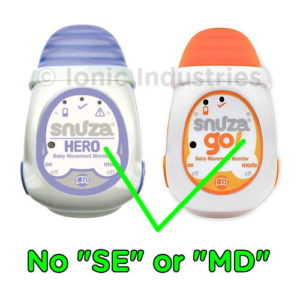 These original Snuza models take a 14250 size battery, and you can buy brand new, long-life replacements through this 14250 battery supplier on eBay.

Snuza have recently updated their designs and released new versions of the Go and Hero models, called the Go SE, the Hero SE and the Hero MD. Along with other changes, Snuza have changed the size and type of battery that the monitors require. These models have the letters SE or MD in small text marked on the front label of the Snuza. Click to enlarge the photo: 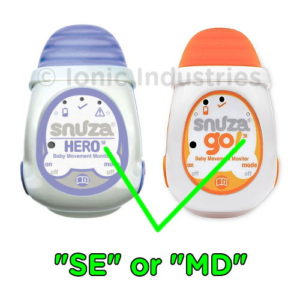 These SE and MD Snuza models take a CR2 size battery, and you can buy brand new, long-life replacements through this CR2 battery supplier on eBay.

How To Replace the Battery

There have been reports of some Snuza monitors not registering the new battery when it is fitted. A frequent solution to this is to reset the Snuza using the following reset procedure:

If your Snuza still shows a new battery as empty then your monitor might have developed a fault (see below.) Test your Snuza with another new battery or have it checked by Snuza. Do not use it with your child.

A small number of Snuza monitors have apparently developed faults whereby they will short out and drain the battery too quickly causing the battery to heat up and the monitor to claim that the battery is empty. See the feedback on Amazon here (and scroll down.) Of course, this is only a small number of reports out of tens of thousands sold but is something to be aware of if your Snuza seems to be having battery problems. Your Snuza monitor is under at least a 1 year guarantee with Snuza, so they should repair any faults that occur within this timeframe for you.

10 thoughts on “Which Replacement Battery for Your Snuza?”